My Long Journey to Becoming a Published Children’s Book Author 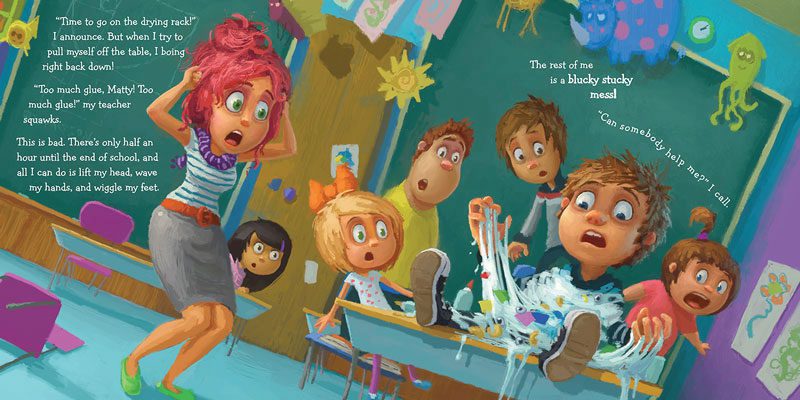 My first attempt at writing a picture book came in 1998.

I thought the story was amazing. It wasn’t.

Fortunately, I was twenty-two years old, I had just completed my Bachelor’s degree in English, and I knew everything. I spent the next year of my life making all the wrong moves, trying to get my story published. I submitted on my own to large houses that only accept agented materials, wrote stories that I labeled as picture books, but were five thousand words long, and put together ridiculous query letters daring publishing houses to pass on what was sure to be the next great work in children’s literature.

Almost immediately, I had a need for actual employment. I began working in a preschool surrounded by picture books that were actually good and got a part-time job as a Children’s Librarian to make ends meet. Slowly, I began to realize something awful. My stories weren’t good, and my way of getting them published was even worse. The twenty-two-year-old who knew everything had become a twenty-three-year-old who knew nothing. It was the perfect starting point.

The next few years were spent taking the business of writing and publishing seriously. There were groups to join and books to read. I joined SCBWI or the Society of Children’s Book Writers and Illustrators. It was an amazing resource putting me in touch with people and organizations that understood from experience what it took to get something published. I read any picture book that I came across and borrowed from the limitless imaginations of the kids in my class and the ones that came through the library. If you want to write picture books, find a job working with children. It’s basically cheating.

While writing picture books was starting to make a little sense, the submission process was still frustrating. At a time when most houses still only accepted submissions via snail mail, a writer could wait six months to a year for a form letter response that basically said “thanks, but no thanks.”  I had begun to receive a few personalized rejections. In the world of submissions, a “no” that is personalized is viewed as a positive, so I kept at it.

Around the spring of 2006, an ordinary glue spill in my preschool classroom sparked an idea for a story called Too Much Glue. I know that I didn’t exactly reinvent the wheel on the title. Simple works, too. While the first draft came rapidly, after sharing it with others, I knew there was a long way to go before I could submit. When it was polished and shined, I began sending the story around. By that time, the Children’s Writers and Illustrators Market guide had become a Bible of sorts to me, so I at least knew that the places I was submitting to were actually accepting unsolicited submissions and also had some interest in off-beat stories with lots of cartoonish action.

For three years, the story traveled all around the United States. Absolutely nobody had any interest in turning it into a book. Finally, in the fall of 2009, I got a nibble. Shari Dash Greenspan at Flashlight Press thought that maybe there was something there, but we needed to do some more edits. Fortunately, I love editing. For a few weeks, we went back and forth. The process was amazing. Instead of “I don’t like this do that,” Shari was very much “This might not work. What else could you do with it?” Honest, positive, and creatively stimulating all at the same time.

Finally, the edits were done in November of 2009. Honestly, we all know the edits are never really done, but they had come to a stopping point. “This is it,” I thought. “It is finally going to happen.”

But, by November of 2010, I hadn’t heard anything from Flashlight Press. Not wanting to agitate the people holding my book’s future in their hands I sent a polite email asking the status. “Still in the running,” was the reply. I thought that was much better than no. I could wait a little longer.

But, by November of 2011, I still hadn’t heard anything from Flashlight Press. Another email was sent. “Still in the running,” was the reply. But this time it was followed by a smiley-faced emoji. Wow!  I couldn’t believe how lucky I was to get a smiley-faced emoji from a publishing house and I can’t stand emojis! In desperate times, we use anything we can to buoy our spirits. 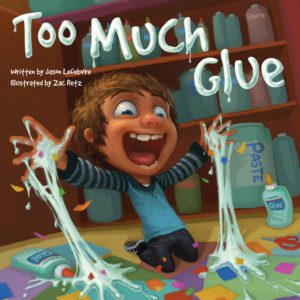 May 14, 2012, I received an email. I know that was the date because I still have it. “It’s easy for me to say ‘no, thanks’ to manuscripts I don’t like. It always takes a lot longer for us to say ‘yes’ – but we’re saying ‘yes’ to Too Much Glue, if it’s still available,” were Shari’s exact words. It had been fourteen years since my first pathetic attempt at writing. Those words made everything worth it.

Lots of good fortune has followed. I’ve been lucky. The book was illustrated by the immensely talented Zac Retz. You never know if you will like the individual that turns your words into pictures. Zac the illustrator and Zac the person are both as good as they come. I am now represented by Alyssa Eisner Henkin at Trident Media Group. She is a real agent who represents real authors, so I still can’t quite figure out why she’s representing me, but I don’t ask too many questions when good fortune strikes.

I still write, work hard, and hope for the best. But I try to follow the advice I give to kids when I’m lucky enough to do a school visit. We spend a lot of time worrying about what we don’t have and sometimes forget about everything we have. There is no guarantee I will ever have another story published. But I have Too Much Glue. I can hold it. I can hug it. I can share it with other people. My Mom can make it into a necklace and wear it around to make sure that everyone knows her son wrote a book. And she would. It won’t stop me from trying to get another book published, but it will help me deal with the disappointment if I don’t. I have become a forty-one-year-old who at least knows something. 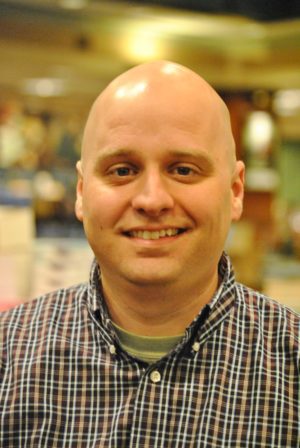 JASON LEFEBVRE is the author of Too Much Glue, illustrated by Zac Retz. Jason was born and raised in Holyoke, MA, where he still resides. Many of his story ideas come directly from his experiences as a preschool paraprofessional and his job at the Holyoke Public Library, where he’s been a children’s librarian since 2005.